Hey friends. Recently, I’ve been watching a fair amount of films, especially classic satires. After watching these movies, I like to write some thoughts about them and see what I am able to take away. It doesn’t have to be every movie, but I highly recommend taking down some notes about an interesting film!

American Beauty has become one of my favorite movies so far, and that is not an understatement. This was the first movie that I immediately began writing about. AB deals with the satire and irony of the typical American middle class. Think classic suburban neighborhood complete with waving neighbors and lawn sprinklers. American Beauty turns that ideal inside-out to show what goes on behind seemingly perfect closed doors. Also, the movie in itself is pretty goddamn beautiful.

Heathers is a great film to watch if you have a darker sense of humor like I do. It’s an 80’s cult classic, which deals with high school popularity and society. There are a lot of films about the struggles of high school, but none really compares to dark-sided smartness of Heathers. 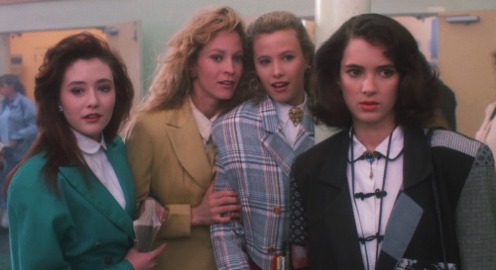 I’ve liked Amy Poehler since she was on SNL, and I continued to like her when she starred in Parks and Rec as Leslie Knope. Yes Please is a hilarious, honest and insightful book that I read through faster than I’ve ever read a book before. To be more concise, go buy it.

The fight scenes, the acting, the cinematography, and general badass-ness are what make Daredevil such a great superhero TV show. I’m currently in the middle of season 2 and it gets really interesting at the fourth episode! Although to me, Jessica Jones still has a one-up on Daredevil.

For my last wicked cool thing of March, I’ve decided to throw in a beauty product that I’ve been wearing on my lips. NYX’s soft matte lip creams has been mentioned on this blog before, but they came out with some new shades like Madrid. And of course, this is a darker, berry-toned creamy liquid lipstick.